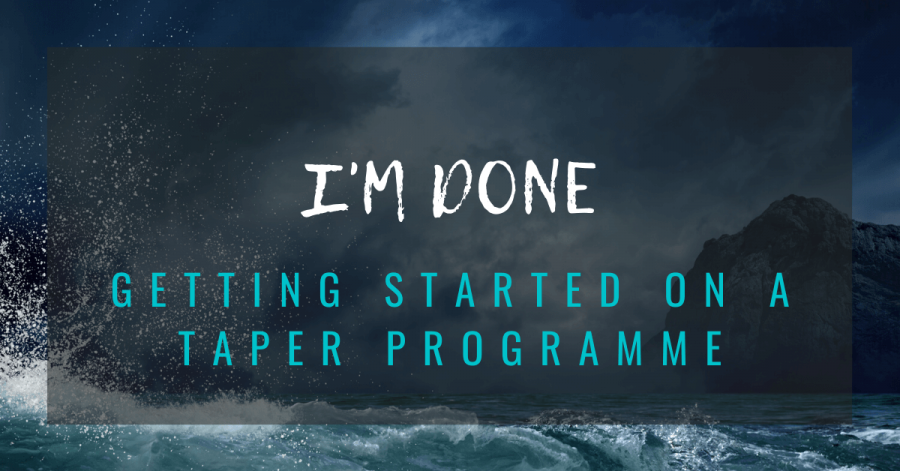 The decision to taper off an anti-depressant medication is not one to be taken lightly. It is likely that the medication served a purpose in the beginning, allowing “time” and “space” to sort through emotions or control some anxiety, to get back on track. This is often necessary given the alternative might have been self-harm or harm to others. The taper programme prescribed by GPs can often cause more damage than good, resulting in hopeless feelings of either being parked on the medication because the withdrawal was too traumatic, or the belief that there is no way to function without taking the medication. Follow me in the coming weeks as we look into what a taper programme with me looks like.

To avoid the possibility of having to take the medication again in the future, the beginning of a taper journey begins with identifying the reason the medication was taken in the first place. The detail of the devil is not important but a general understanding of why is. Maybe a traumatic event threw up more than it was possible to cope with, or maybe it was a slow, downhill slide into depression. Perhaps anxiety got out of hand or it just wasn’t possible to get on top of post-natal depression. Understanding the “why” allows a more comprehensive treatment plan. Not addressing the “why” before tapering off an anti-depressant leaves the situation open to a possible repeat of taking the medication in the future.

The concept of depression and anxiety in Chinese medicine is vast. It is also much more complex and wide-ranging than the descriptions provided in the DSM V to guide mental health care practitioners on diagnosis. So rather than getting into diagnosis, it is easier to focus on what the medications actually do from a Chinese medicine perspective.

Anti-depressants, specifically Selective Serotonin Reuptake Inhibitors (SSRIs) and Serotonin Noradrenalin Reuptake inhibitors (SNRIs) are designed to increase the amount of serotonin, or serotonin and noradrenalin, available to the brain. These neurotransmitters increase the brain’s ability to repress difficult emotions, in the hope that a happy, free and easy countenance is the result. The medication effectively takes over the body’s reduced ability in the hope that there are no feelings of ‘constraint’ or ability to cope. The important thing to realise is that the body itself is not getting better, but that a medication has allowed the mind some space to think by repressing the effect of big emotions.

If we consider depression, Chinese medicine will often view constraint of emotions (nothing is free flowing), known as Qi stagnation, and Blood deficiency as key aspects of depression. Although this is a simplistic view of depression from a Chinese medicine perspective, it is useful to illustrate the point of what happens when the anti-depressant is taken. If emotions are constrained and there are deficiencies in the body, taking the medication does not fix those health issues, mostly it just masks them. The constraint and deficiencies, if left unresolved, continue to fester away. Sort of like putting some sticky tape over the dash light that comes up on your vehicle dashboard and hoping for the best.

Further, depending on how long the anti-depressant is taken, the medication itself can cause deficiencies in the body that result in nutritional imbalances. There are two perspectives here, both a Chinese medicine one, and also a biomedicine one too.

The relationship between Chinese medicine and long-term anti-depressant use

Anti-depressants were originally designed to be used for the short term, maybe just a few months. In Chinese medicine, the body can cope with this no problems. But continued use adds to the body’s problems, and here is why.

When we are born, Chinese medicine says that we are born with a certain amount of Jing. Jing could be likened to DNA – the body does not increase the amount of DNA but through the process of living DNA is slowly “used up” bringing about ageing. This is the same as Jing – whilst we are born with a certain amount of Jing, pre-natal Jing can’t be replaced and will be used up according to the lifestyle, emotional and nutritional choices made. The body can support Jing postnatally through lifestyle and nutrition in order to balance increased use of Jing, but if the taking is more than the making, the body’s Jing will get run down and accelerate ageing and disease. Some things use up a lot of Jing and cause accelerated ageing. For example, stress requires our body to put in extra and draw on our reserves. These reserves are Jing. It stands to reason that if there is more Jing taken out through stress, without being replaced through proper nutrition and relaxation, you will run your reserves down. This causes a cascade of physical and mental health problems in Chinese medicine.

Jing is also used when substances are consumed that create an un-natural state of being. A good example is alcohol or recreational drugs; the feeling is an un-natural high and this extra “state” of being uses up reserves – Jing. If appropriate nutrition and rest are not taken, and the behaviour causing excess consumption is not addressed, accelerated ageing and possible disease may follow. Anti-depressants do the same thing by causing the body to reach deep and use up reserves to produce a state of being that is not natural to the body at the time. Taking the anti-depressant should cause a state of being that is happy and easy-going. This is using up excess amounts of Jing. If it is just a few months, no problem, your body can recover. Long-term use, however, requires careful rebuilding to not only address the reason the anti-depressant was taken, but also the damage to the body’s Jing reserves.

The relationship between biomedicine and long-term anti-depressant use

It is an established concept that many pharmaceutical medications use up more than their fair share of nutrients in the body. In much the same way that anti-depressants use up Jing in Chinese medicine, biomedicine identifies that many medications also require extra nutrients, known as co-factors, so that the body can process the medication for use. As with Jing use, the body can handle this for a short period of time, but over the long term, this may cause nutrient deficiencies within the body that must be addressed.

Although many medications provide relief, they may also begin to create their own problems in your body through using up extra nutrients, often depleting your body of essential nutrients. Most anti-depressants will use up extra amounts of nutrients in your body which in turn cause a cascade of health issues. Looking for possible nutrient deficiencies after long-term anti-depressant use is an important step in preparing the body for a taper programme.

Before starting a taper programme

Outside of an in-depth initial consultation to determine the reasons for taking an anti-depressant in the first place, and the rationale for coming off the anti-depressant, a Chinese medicine diagnosis determines an initial treatment plan to bring the body and mind back onto the same page. Additionally, some testing is done to determine if there are any underlying health issues, including, but not limited to, nutritional deficiencies such as iron and ferritin, vitamin B12 and folate, thyroid function, liver function, kidney function, and the level of inflammation present in the body. It is important to make sure any physical deficiencies and imbalances are rectified before a taper begins, however the emotional context is addressed over the course of the taper and often beyond.

This information is being provided to you for educational and informational purposes only. It is being provided to educate you about how I as a practitioner might help someone who has decided, with their primary health care provider, to come off medication to reach their health goals. It is not intended to treat or cure any specific illness and is not to replace the guidance provided by your own medical practitioner. This information is to be used at your own risk based on your own judgment. At no time should you stop taking medication prescribed by your medical practitioner without first discussing this with your health care provider.

I use cookies on my website to give you the most relevant experience by remembering your preferences and repeat visits. By continuing to use my website, I will assume you accept and and consent to the use of all the cookies.
Cookie settingsACCEPT
Manage consent